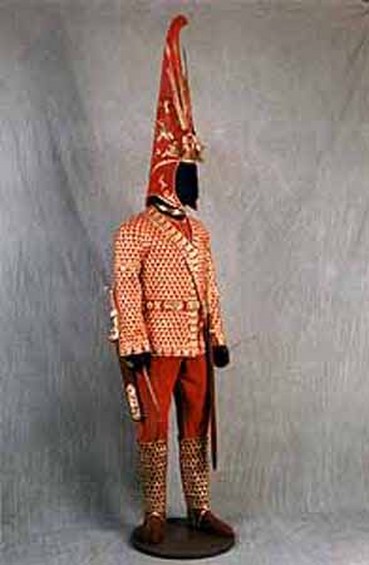 The Amazons held particular importance in the Greek psyche, mainly as a social control to keep Greek women suppressed. Many stories of their origins and exploits were recorded by Greek authors; unfortunately most details belong in the realm of myth and do not accurately report "true" history. What was most important to Greek men was the idea of a matriarchy which ultimately fell to the persistence and superiority of Greek "civilization". There probably was no historical Amazon "queen" named Penthisilea who according to myth was finally subdued by the great hero Achilles. Tellingly, Quintus of Smyrna, the recorder of the most detailed account of the death of Penthisilea, ended the tale of the Amazon queen with the cautionary addendum that the Trojan women watching the battle between Greeks and Amazons and who had been eager to join in the fighting, were immediately sent back to their needlework after the warrior-queen's death. In the Greek worldview, warfare was a strictly man's job and any female interference with that order would end only in disaster for the woman.

However in this case, the myth of the Amazons does have some historical basis. At the end of the 19th century, Russian archaeologists began to excavate the graves of ancient women warriors in the Ukraine and Kazakhstan. Hundreds of these graves of warrior women are all affiliated with the various Scythian tribes; especially the Saka, Sarmatian, Sauromatian, and Pazyryk cultures, extending from Transylvania in the west (where the Scythians had gold mines beginning in the 600s BC) to Mongolia in the east. The Scythians were an Indo-Iranian people (near cousins to the ancient Celts and Germans to their west), fierce warriors of the Russian steppes who mainly led a nomadic, autonomous lifestyle. They buried their dead in elaborate underground tombs (often encoffined in entire tree trunks), with lavish grave goods of gold and silver jewelry, food, horses (often dressed in felt antlers as stags), armor and weaponry, eating utensils, ritual paraphernalia, and sometimes pounds of marijuana to smoke for eternity.

Both the evidence of their similar grave offerings as well as the testimony of ancient Greek and Roman authors tell us that both men and women enjoyed immense freedom, equality, prosperity, and health. Transgendered people of both sexes also played vital roles in Scythian culture. Besides the prevalent warrior-priestesses, several ancient authors mention the Scythian Enaree, or "not-warrior", biological males who adopted female clothing, language, mannerisms, and labor, sometimes serving as ritual leaders and divinatory resources. Dr. Jeannine Davis-Kimball, director of the Center for the Study of Eurasian Nomads (CSEN) located in Berkeley, has extensively researched the Enaree and has published several works on them using both Greco-Roman written sources as well as exhaustive physical evidence of their existence.

One burial site of an honored Scythian warrior (of the Saka subgroup) was discovered in Issyk, Kazakhstan in 1969. A large burial mound (called a kurgan) 20 ft. high was found to have been robbed long ago, but a small wooden burial chamber at the south portion of the mound revealed the still unlooted and startlingly rich burial of what was initially (and still prevalently) believed to have been a young man, dating back to approximately 400 BC. Unfortunately "his" skeleton had been so badly crushed by the caving in of the burial chamber, that the gender was not determinable from the forms of the skeletal remains. Archaeologists therefore assigned the skeleton a male gender because of the lavish warrior goods found with the corpse, which included a gilt dagger, a gilt long sword, and a whip with a golden handle. "He" had also been buried in a beautiful and ornate golden tunic, trousers, and boots consisting of over 4,000 gold plaques linked like chain mail to resemble armor. A wide belt of elaborately decorated gold closed the tunic about the body's waist. And resting on the head was a stunning, 2 foot high gold and felt headdress, conical in shape, and decorated intricately with animal appliqués and free-standing feathers and arrows (or possibly abstract leaves, stems, and flowers).


However, not all the grave goods found at the Issyk site necessarily belong to a man's grave. Dr. Kimball has recently pointed out in an Archaeology article that previous archaeologists have merely assumed the body to have been male because of the golden armor and weaponry, without acknowledging that some 20 percent of all Scythian graves which contain armature belong to those of women. In the grave of the "Golden Prince", there was also a bronze mirror (generally, but not exclusively, a woman's article in the Scythian cultures) as well as many beads (some Scythian male burials hold a single bead but none more than that), and a spindlewhorl, which is exclusively not only a woman's article for treating wool, but also an important part of a priestesses ritual goods. Dr. Kimball (who is not only a brilliant scholar and tenacious field archaeologist but a truly wonderful person as well) also pointed out that this burial site also contained beaters for koumiss (frothy, fermented mare's milk that was a staple of the Scythian diet). Koumiss-beaters are only found in graves of Scythian priestesses and are still today considered an essential item for female shamans among southern Siberian tribes. Considering these female grave goods, I agree with Dr. Kimball in reassessing this warrior's gender as female. And not only was she a great warrior but undoubtedly a high-ranking (and possibly royal) priestess as well.

What renders this burial at Issyk even more exciting, in light of my previous articles on the ancient Germanic runes, is that a silver bowl was also found with this warrior-priestess, bearing what one scholar calls a "mysterious inscription, still undeciphered"

[The "mysterious inscription" of Sakan proto-runes inside the silver bowl belonging to the Issyk warrior, from Rolle (1980)] Until the discovery of this bowl, scholars had believed that the Scythians did not have an alphabet. When I first saw a sketch of this inscription, I recognized all the characters immediately as having identical forms with Germanic runes. In fact, I tentatively read part of the inscription as UUilaz or Wilaz, possibly an Indo-Iranian version of Wilagaz, or in modern English, Wily (see my last article for the possibly homosexual connotations of this name). After a meeting I had with Dr. Kimball in Berkeley, she e-mailed her Russian colleagues who are on-site in Kazakhstan, and they thoughtfully e-mailed me photographs of the silver bowl and it's inscription.

Dr. Kimball also provided me with a photo of another ancient inscription found on a rock in the Ukraine bearing even more runic-like characters! After seeing the Issyk inscription more clearly in photographs, I am now even more convinced that the characters inscribed are runic. If so, this is an amazing find for a people who supposedly had no alphabet. Until now, the earliest runic inscription acknowledged by scholars dates to no earlier than 50 AD. The generally accepted theory is that the runic alphabet of the ancient Germans was of North Italic origin. However, if this inscription is in fact runic (and what I have tentatively labeled "Sakan proto-runes"), then the Germanic runes are not only 400 years older than previously thought, but did not come from northern Italy at all, but originated with the Scythian peoples of the Ukraine.

Even more interesting for my readers is that according to Christian historian Jordanes, writing in the Origin and Deeds of the Goths in 551 AD, the mythological homeland of the homosexual Heruli tribe (whom I've written of in previous articles) was the swampy area of the Don River mouth on the Sea of Azov (the Ukraine), the southern heartland of ancient Scythia! I have therefore developed a theory that the Saka-Scythian people of the Ukraine and Kazakhstan created the "proto-runes" based on their limited trade contact with the Greeks and their alphabet. Three or four hundred years later (around the time of Jesus) early Heruli marauders may then have learned the Indo-Iranian runes in the Ukraine from transvestite priest(esse)s of the Saka, adapted them to the Germanic language, and then spread them across northern Europe during their own raids.

For more information on the Golden Prince(ss), read Dr. Jeannine Davis-Kimball's article "Chieftain or Warrior Priestess?" in Archaeology (Sep/Oct 1997), as well as Renate Rolle's book, The World of the Scythians (although the Issyk burial skeleton is here called male throughout). For more information on the debate about the historical basis for the Amazons, see William R. Tyrrell's book, Amazons: A Study in Athenian Mythmaking. The CSEN web site also has one of Dr. Kimball's papers on the excavations of many Scythian warrior women at http://www.csen.org/WomenWarriors/Statuses_Women_Warriors.html

Numerous myths and legends grew up around women or tribes of women in ancient times, who either fought alongside or alone against men. The Greeks and Romans called some of these Amazons. The Scythian word for these women is Oiorpata, meaning "to kill man."Not until the 20th century did the archaeological evidence actually prove the existence of thse fearsome women and, thus, historians and scholars have largely dismissed the ancient accounts as being purely mythological.However, new excavations at Pokrovka on the Kazakh steppes along the Kazakhstan and Russian border have yielded evidence to the contrary -- that women among the Sauromatian and Early Sarmatian (Early Nomad) tribes were warriors. Their kurgans (burial mounds) are found in the southern Ural steppes.Offering included in their burials that the nomads needed for their journey to the next world included ordinary household objects, religious and cultic items, horse trappings, and weaponry for both men and women alike.The populations in this region were Indo-Europoids and spoke an Indo-Iranian language. A skull of one such women was reconstructed. At this early date there is no Mongoloid admixture among the Sauromantians and Sarmatians at Pokrovka.

The women's occupations during their lifetime run the gamut from housewife, to herder, to priestess, to warrior horsewoman. These are the remains of a society lost to history, where gender roles were not defined according to sex and women more often than not were tribal leaders with power and status.Two cemeteries, Pokrovka 10 and Pokrovka 2, had significant numbers of female burials with mortuary offerings indicating they were priestesses of various degrees of rank or importance. This priestess pictured here was of very high status.

Artifacts from a young priestess' burial: mirror, spindle whorl, bone spoon, beads, boar's tusk, iron knife and remnants of her bodice (left, large brown area and over mirror) in situ. The mirror had been placed under her back and the copper in the mirror preserved the textiles.The skeleton found in the burial with these artifacts was in her teens. She was buried in a very small catacomb off a small pit and was quite difficult to excavated. However, all the details of her burial were carefully preserved.

The bronze mirror lay under the priestess near her shoulder blades. The copper in the mirror preserved some of the textile from her bodice. Also in her burial were animal bones and an iron knife; a bone-carved cultic spoon, partially lost; a boar's tusk, imported beads, and a clay spindlewhorl. This priestess was in her teens at the time of her death of unknown causes. 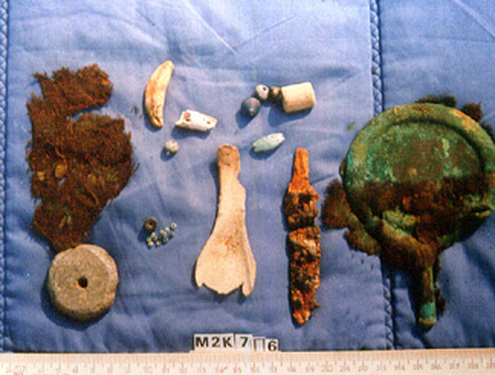 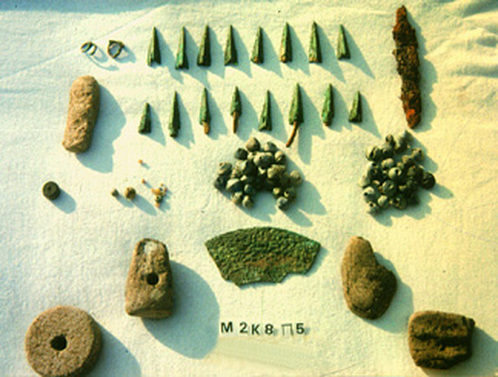 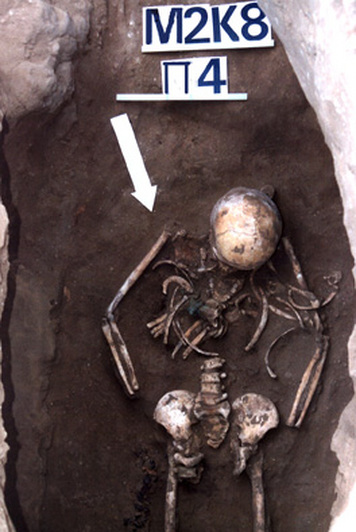