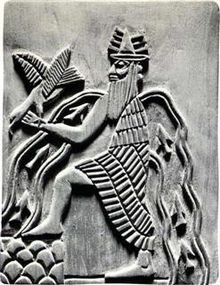 Enki
GATEWAY ANCESTOR: "In art Enki (Ankh) is represented as a seated God with long beard, wearing a cap with many horns and a long, pleated robe. Streams of water flow from his arms to the ground, sometimes with little fish swimming along the flow. Enki was God of the subterranean freshwater ocean (abju), and was especially associated with wisdom, magic and incantations, and with the arts and crafts of civilization." - Black and Green, Gods, Demons and Symbols of Ancient Mesopotamia.

"The God Enki, or Ea (Yah), the God of water, was also considered the Supreme God of wisdom and magic, doubtless owing to the subtle pervasiveness of water both above and below the earth and to the vital part it plays in engendering life and thus making possible the development of vegetation and communications by the skill of man." - John Gray, Near Eastern Mythology

Enki (Sumerian: dEN.KI(G)) is a god in Sumerian mythology, later known as Ea in Akkadian and Babylonian mythology. He was originally patron god of the city of Eridu, but later the influence of his cult spread throughout Mesopotamia and to the Canaanites, Hittites and Hurrians. He was the deity of crafts (gašam); mischief; water, seawater, and lakewater (a, aba, ab), intelligence (gestú, literally "ear") and creation (Nudimmud: nu, likeness, dim mud, make bear). He was associated with the southern band of constellations called stars of Ea, but also with the constellation AŠ-IKU, the Field (Square of Pegasus). His sacred number name was "40". A large number of myths about Enki have been collected from many sites, stretching from Southern Iraq to the Levantine coast. He figures in the earliest extant cuneiform inscriptions throughout the region and was prominent from the third millennium down to Helenistic times. His myths seem to have had an influence upon later Biblical and Qu'ranic stories. The exact meaning of his name is uncertain: the common translation is "Lord of the Earth": the Sumerian en is translated as a title equivalent to "lord"; it was originally a title given to the High Priest; ki means "earth"; but there are theories that ki in this name has another origin, possibly kig of unknown meaning, or kur meaning "mound". The name Ea is allegedly Hurrian in origin while others claim that it is possibly of Semitic origin and may be a derivation from the West-Semitic root *hyy meaning "life" in this case used for "spring", "running water." In Sumerian E-A means "the house of water", and it has been suggested that this was originally the name for the shrine to the God at Eridu. http://en.wikipedia.org/wiki/Enki

The House of Vere 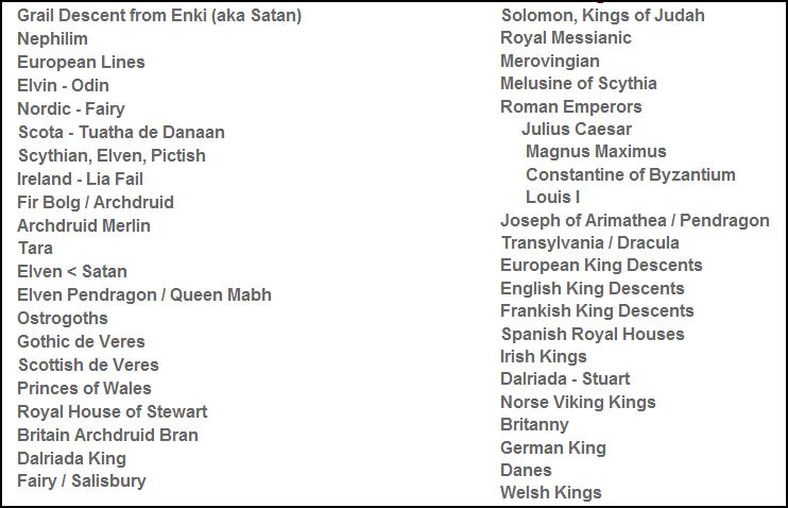 ALL LINES of de Vere-Collison DRAGON LINEAGE are included in detail in
THE DRAGON CEDE
http://www.amazon.com/Dragon-Cede-Nicholas-Vere/dp/1585091189

The Royal House of Vere – The Senior Angevin House of the original ‘Princes and Counts of Anjou’ – are latterly of Breton and Flemish extraction and the former senior, Scottish Branch; Hope-Vere of Blackwood, traditionally observed the Flemish law of Noblesse Uterine, and matrilinear and family inheritance in accordance with noble Scottish family law, which contemporarily and historically supports blood descent. The titles of Princeps Draconis and Prince de Vere, currently held by Nicholas de Vere, are acknowledged as foreign titles in confidential files held by the British Government’s Department of Internal Affairs: ‘The Home Office’ and are registered with them as ‘Official Observations’. The right of fons honorum held by Nicholas de Vere is also acknowledged by Her Majesty’s government. These titles are recognised by the most senior branches of the House of Vere.

Nicholas de Vere, though accepting the existence of both with some considerable qualification, does not claim to be either a member of the contemporary British royal household or of its peerage in any sense, and does not claim any status or rank suggestive of such or appertaining thereunto. The Vere princedoms are not modern, socially derived titles; either assumed or bestowed, for or by, political expediency.

The princedoms of Vere are ancient cultural manifestations of genetic qualities carried in the historical Elven Blood Royal. Established in Angiers, France, in 740 a.d. as an Imperial and Royal House arising from far older sacral-regal, Pictish, Scythian Vere origins rooted in antiquity, the House of Vere is academically recorded in a single name and in an unbroken line for over one thousand three hundred years, and consequently is one of the oldest surviving royal dynasties in Europe.

So I trace my lineage back in an unbroken bloodline to the imperial prince Milo de Vere Count of Anjou in 740 A.D., son of Princess Milouziana of the Scythians. She was recorded throughout France as being the Elven, Dragon Princess of the Scottish Picts, and her Grandson Milo II derived his Merovingian descent through his father's marital alliance with the imperial house of Charlene.

Later in history we picked up numerous other lines of Merovingian descent and the attitude in the house of Vere today, both here and in Ireland, reflects that of the Merovingians themselves where inheritance and blood descent is concerned.

Concerning my maternal lineage: my mother is descended from the ancient Collison Jarls of Norfolk, and is the third cousin of the head of the House of Vere. We are a very tightly knit family. The head of the House himself is of Royal Collison descent and this matrilinear Collison extraction also stems from the ancient House of Vere and Princess Milouziana of the Scythians. We are Veres on all sides of the family.

The overall head of the House of Vere today is the Prince Mhaior. By Papal Investiture and by inheritance from the House of the royal O'Brien descendants of King Brian Boru of Tara, the Prince Mhaior is himself an Archduke not an insignificant Irish earl, as some totally ill-informed malcontent once triumphantly proclaimed in a ridiculous, failed attempt at an expose of me.

The Head of the House, formally addresses me as "the Dragon Prince" of the House of Vere.

TT: Who are the Dragons that you write about in your book?

NDV: In brief the recorded Dragon lineage starts with the Annunaki and descends through the proto-Scythians, the Sumerians in one branch and the early Egyptians in another; the Phoenicians, the Mittani, back to the Scythians again through marital alliance, along to the Tuatha de Danaan and the Fir Bolg; down through their Arch-Druidic, Priest-Princely families to the Royal Picts of Scotland and the high kings of the Horse Lords of Dal Riada; through to the Elven dynasty of Pendragon and Avallon del Acqs, and down to a few pure bred families today. 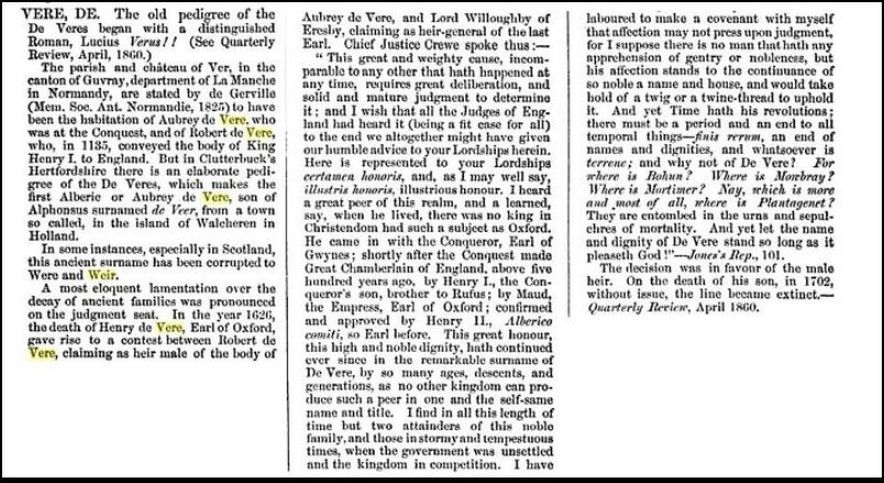 According to "Quarterly Review 1860" the old pedigree of De Vere began with a distinguished Roman: Lucius Verus. 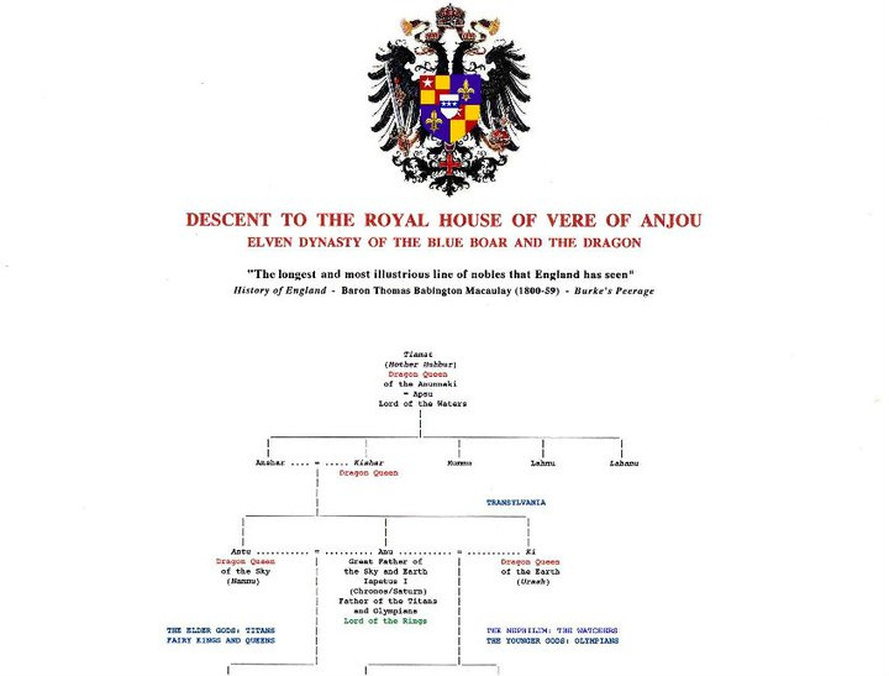 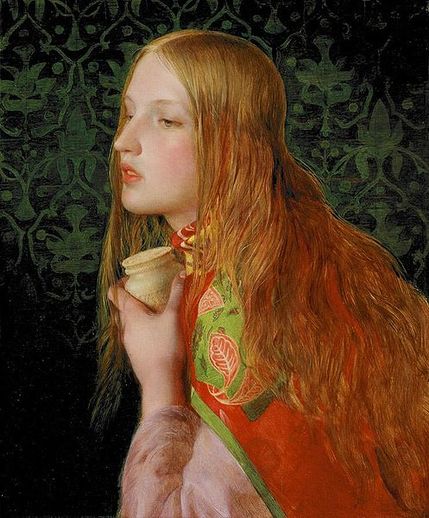 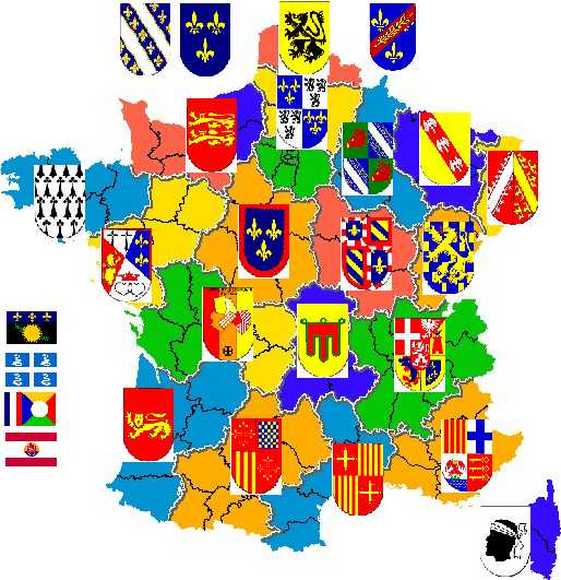 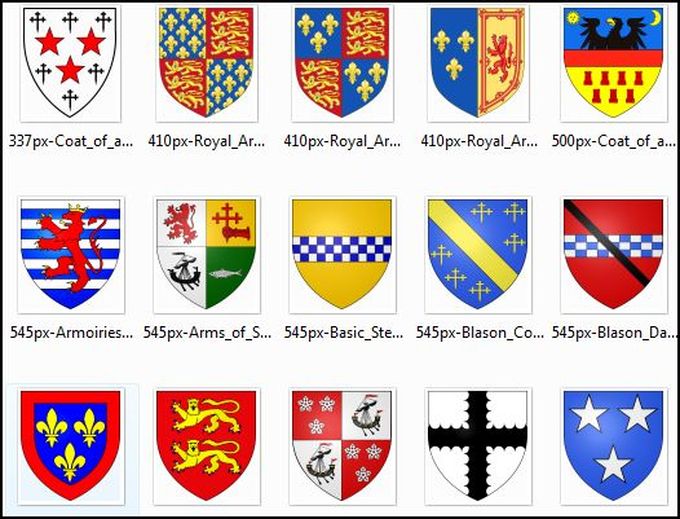 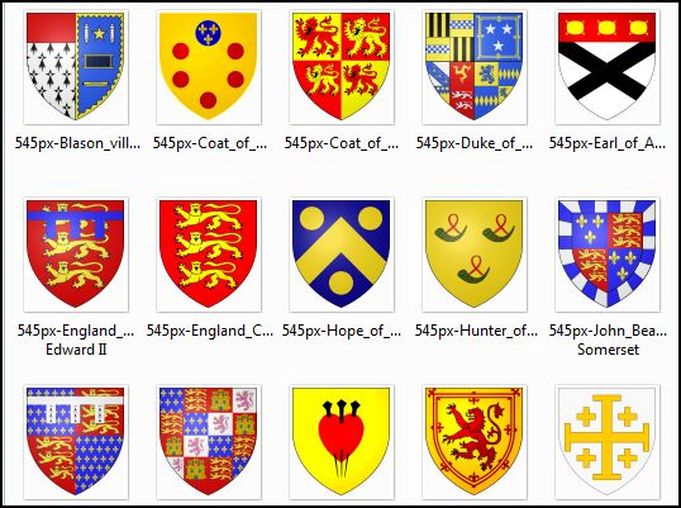 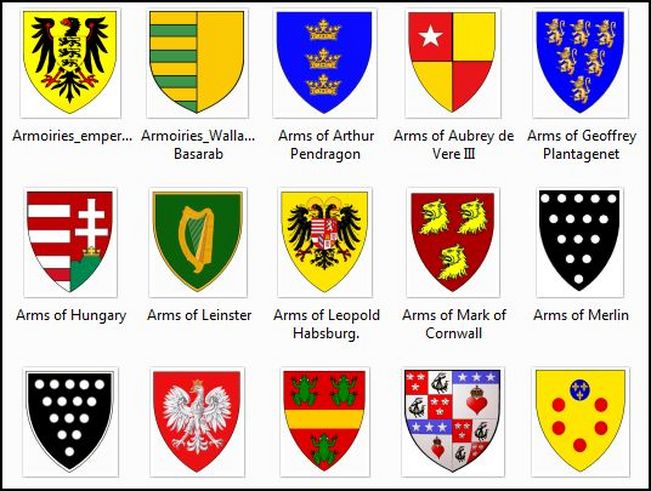 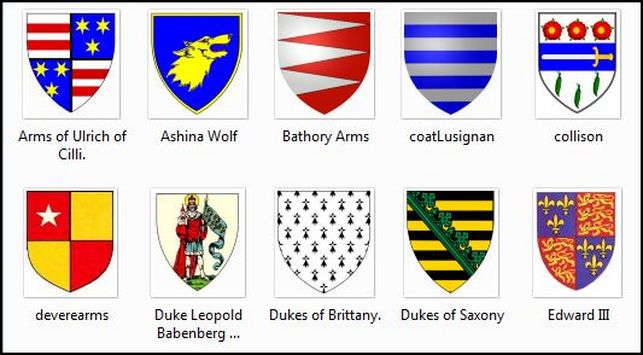 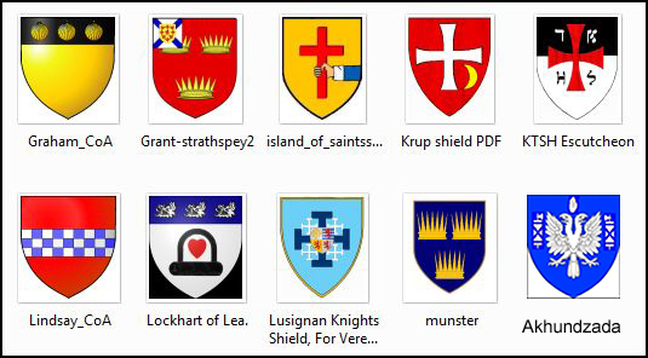 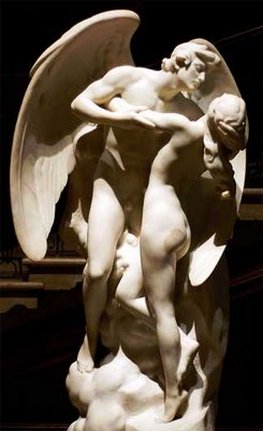 Page numbers from THE DRAGON CEDE 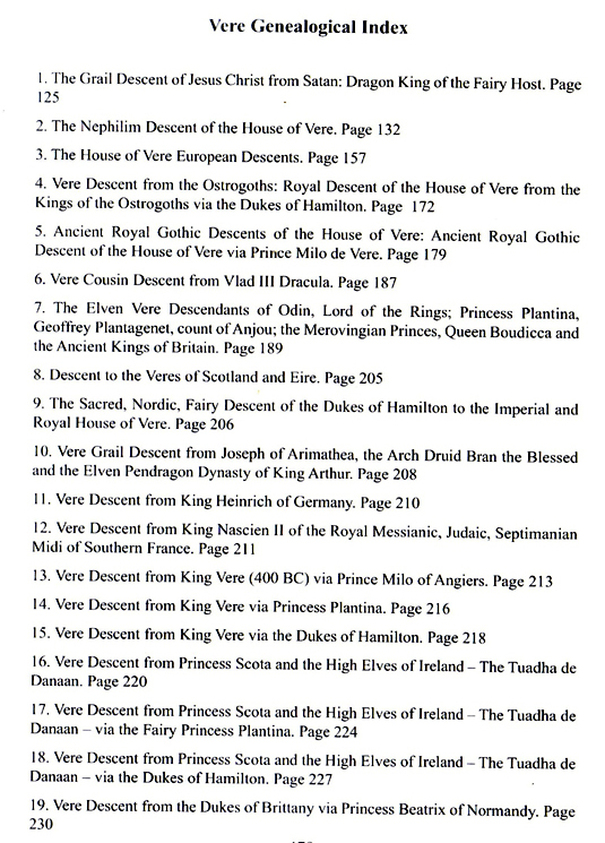 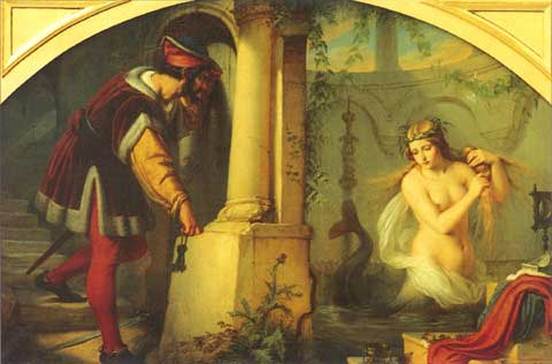 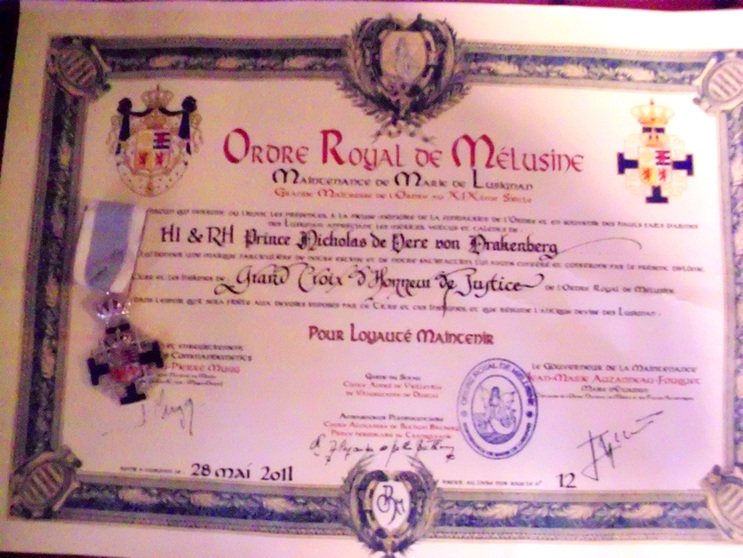 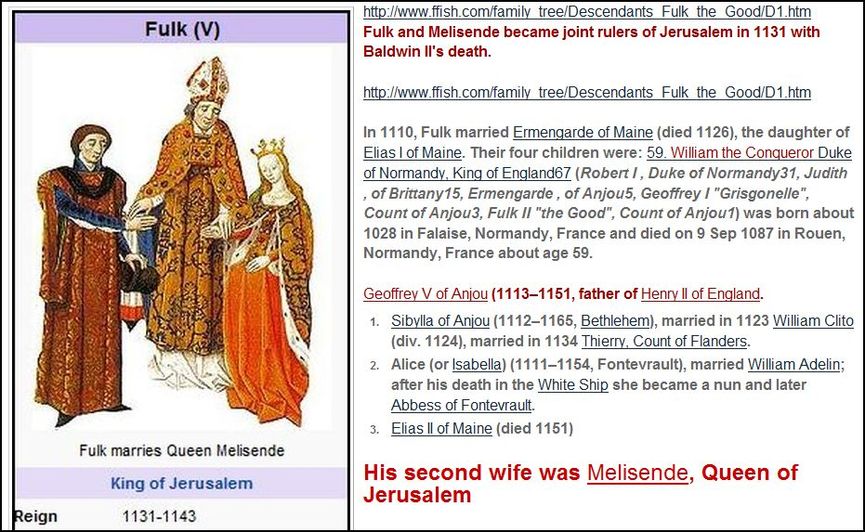 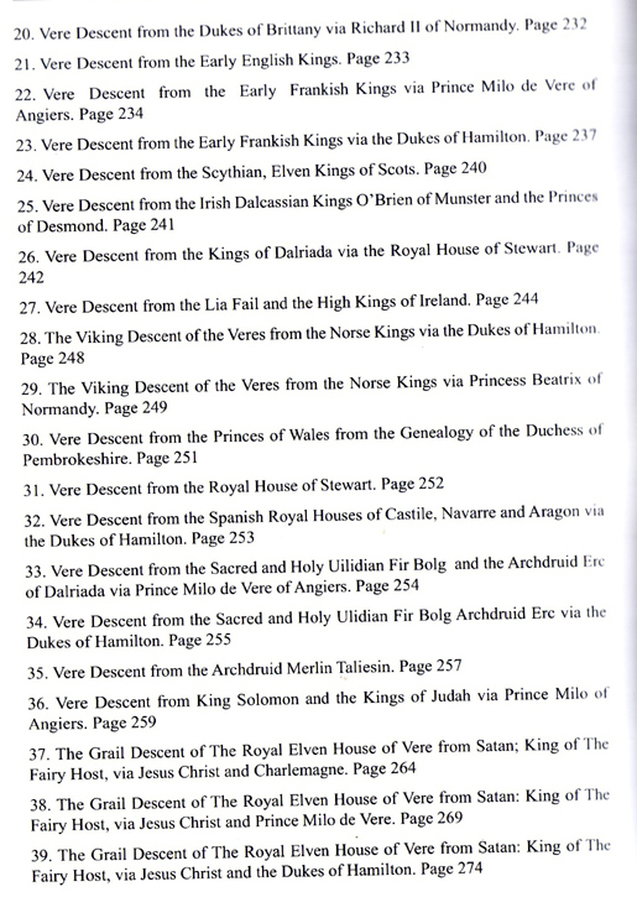 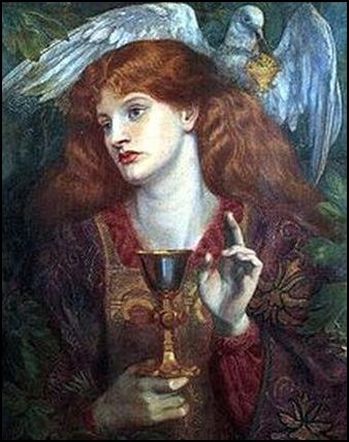 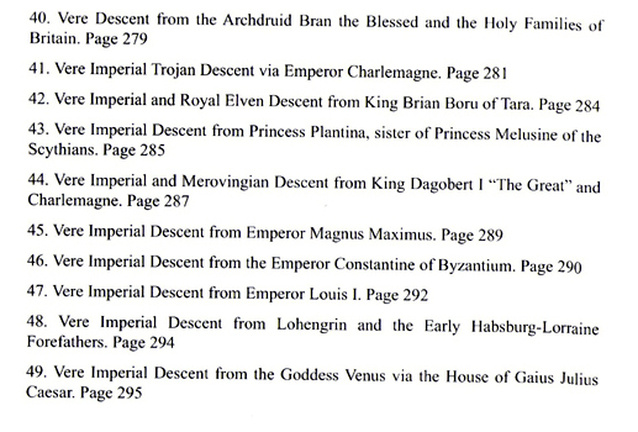 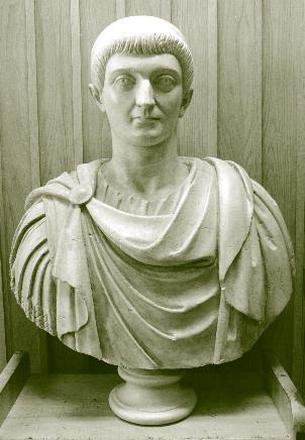 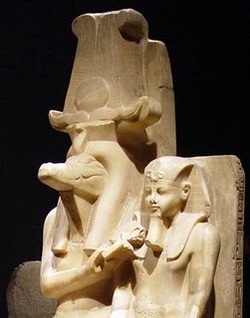 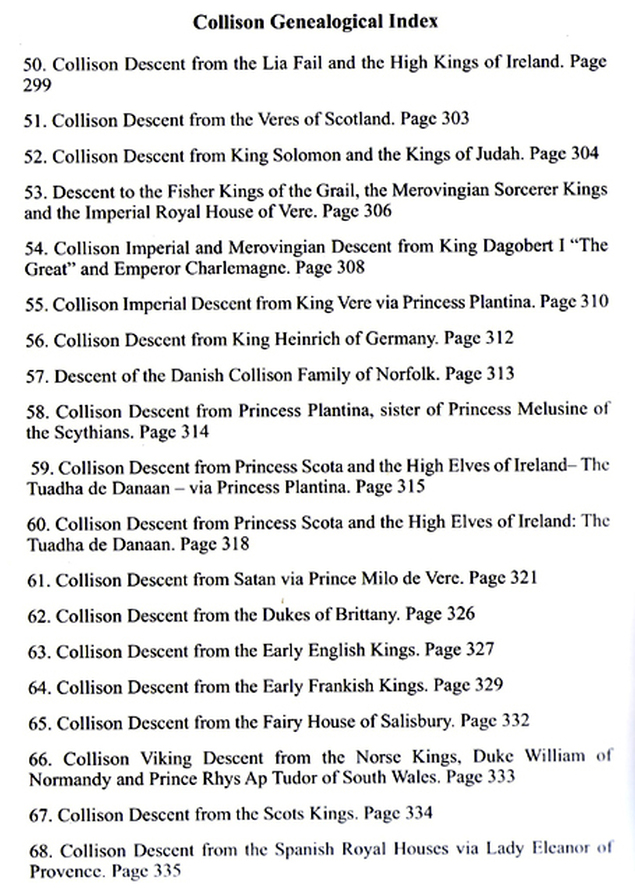 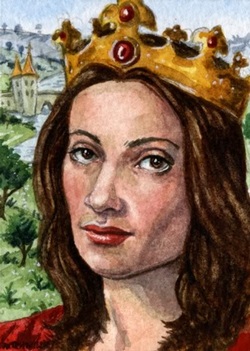 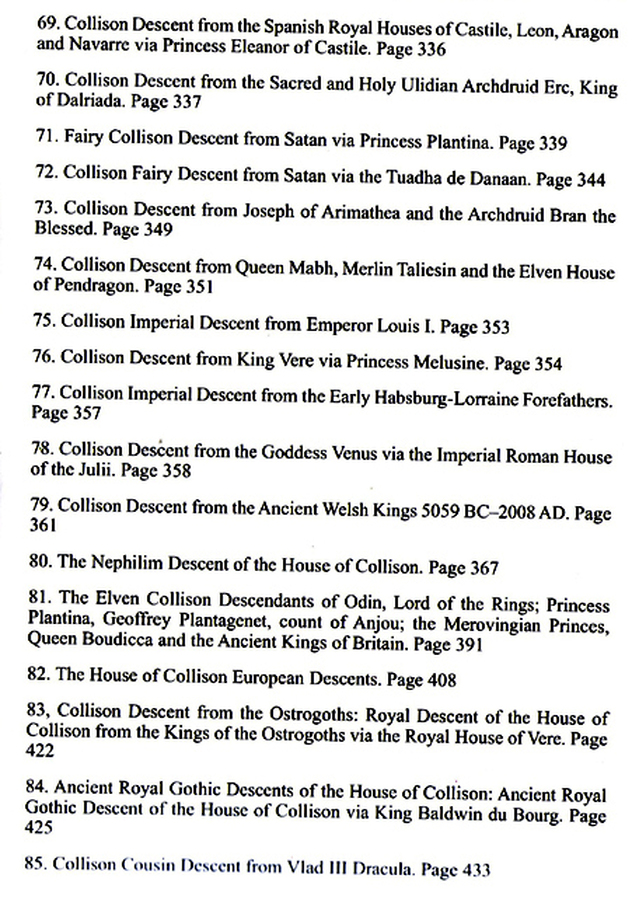 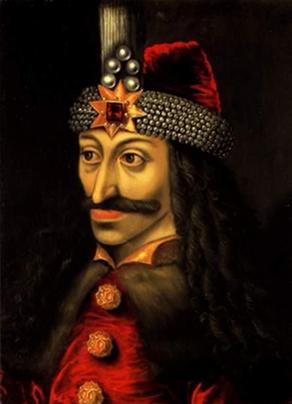 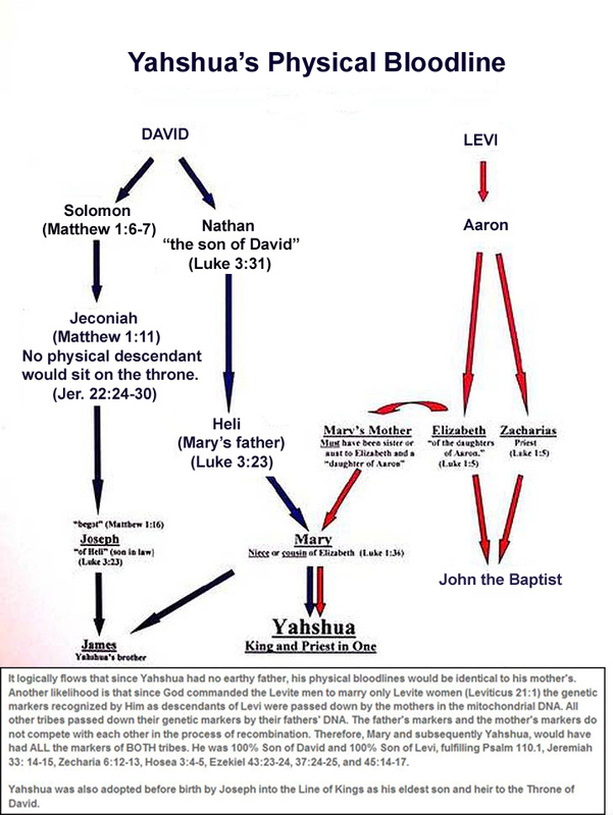 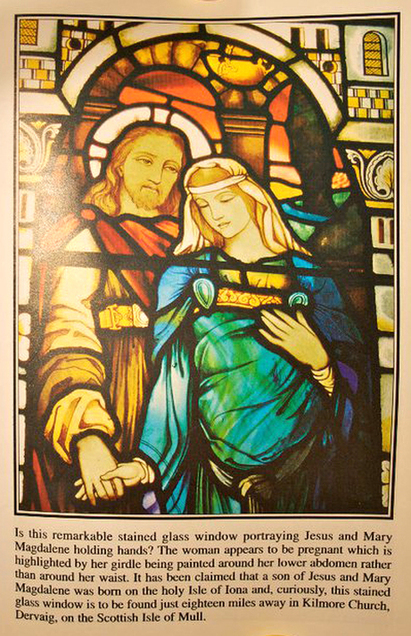 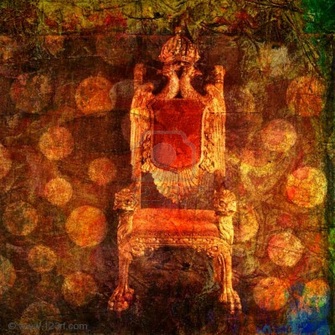