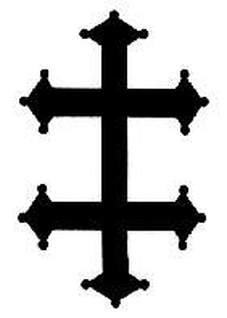 Cross of Lorraine from the Angevin Arms 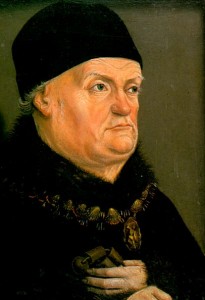 Though little known today, Rene d’Anjou was one of the most influential figures of the Renaissance, and came to assume a huge list of titles, including: Count of Bar, Provence, Piedmont and Guise, Duke of Calabria, Anjou, and Lorraine, and King of Hungary, Naples, and Sicily, Aragon, Valencia, Majorca, Sardinia, and Jerusalem, the last being titular, inherited from his ancestor, Godfroi de Bouillon through the House of Lorraine. Rene has been credited with inventing the double-barred Cross of Lorraine, associated with his ruling House and later the French Resistance movement, but the Templars were known to have used it at least 200 years earlier, and it can probably be traced back further as well. Rene was born on January 16, 1408, in the Lorraine castle at Angers, just one day prior to the date of January 17 that is so central to the story of the Rennes le Chateau and the Holy Grail. (See Dagobert’s Revenge, Vol. 2, #1)

In 1419, at the age of 10, he was married to Isabel of Anjou, then 9. It was also at this time that Rene was installed as Grand Master of that notorious organization (the one which inspired this magazine), the Prieure de Sion. As Dagobert’s Revenge readers know, this is the secret society credited with creating the Knights Templar as their military arm, an organization dedicated to the mystical bloodline of Jesus and the sacred teachings that were passed down to his descendants, which included the Merovingian Kings of France and their many offshoots scattered throughout the royalty of Europe. This society was also extremely powerful and can be said to have controlled the fate of Europe during several key points in history, even up to the present century. Given that Rene was, through his Angevin ancestry one of Christ’s most prominent living descendants, it is natural that he would have been chosen for such an august position, even at a tender age. His uncle, Louis, Cardinal of Bar, was his regent for another ten years, until he was ready to become the Helmsman of the Order than would become the most influential factor in his hugely significant life. Rene also belonged to some other fraternal orders, including the Order of the White Greyhound, the Order of the Fidelity, and his own self-created chivalrous Order of the Ship and Double Crescent (a revision of the Order of the Crescent created by Louis IX), which for some reason was suppressed by the Pope.

In 1415, Rene’s sister Mary was married to the Dauphin of France, later King Charles VII, whose father had been recently overthrown by King Henry V of England, who then proclaimed himself Regent of France and married the Dauphin’s sister, Katherine de Valois. The French were under the domination of the English, but a ray of hope came in the form of Jeanne d’Arc, who first appeared in 1429 at the fortress of Valcouleurs, announcing her divine mission to deliver France from the English overlords, thereby fulfilling an old prophecy about a maid from Orleans who would be sent by God to liberate France. This, she claimed, would require her to visit the Dauphin at his court at Chinon. Instead of requesting that the commandant at Valcouleurs escort her there, she specifically asked for Rene d’Anjou, entreating his father-in-law, the Duke of Anjou, for “your son, a horse, and some good men to take me into France.” This implies that she already had Rene in mind.

It was Rene’s mother, Iolande de Bar, who took Jeanne d’Arc under her wing, convincing the court and the Dauphin that she was in fact the prophesized Maid of Orleans, and even officiating over the examination to ensure her virginity, which made a very dramatic scene in last year’s Joan of Arc film, The Messenger. In the end, it was Rene who accompanied Jeanne to Chinon, and he is said to have been by her side at the siege of Orleans. He also led the main battle at Senlis and was one of Jeanne’s captains at the siege of Paris. Some contemporary chroniclers even wrote that the two were lovers. It was Rene who King Charles VII sent to inform a deflated Jeanne that the siege of Paris was being withdrawn. Afterwards she was captured, sold to the English, convicted of heresy for claiming to speak to God, and then burnt at the stake. It is said that she clutched a Cross of Lorraine at her breast as she prepared to die. Which all makes it seem as though the appearance of the Maid of Orleans was something orchestrated by the House of Lorraine from the very beginning, with full consent from all parties. But as the authors Michael Baigent, Richard Leigh and Henry Lincoln write, “In the centuries that followed, a systematic attempt seems to have been made to expunge all trace of Rene’s possible role in Jeanne’s life.”

The Cross of Lorraine from the Angevin arms

In 1431, Rene inherited the Duchy of Lorraine from his father-in-law, but was imprisoned in Dijon when the Duke of Burgundy staked a rival claim to his inheritance. He was eventually freed with the help of his wife, Isabel, but not before leaving his own two children behind as hostages for the next three years! Rene developed an interest in painting that would last a lifetime, and is known to have decorated one of the rooms in the castle that was his prison. He even studied under Dutch painter Jan van Eyck while there. Later, when Rene and Isabel became the Duke and Duchess of Lorraine, court was held at their castles throughout Anjou and Provence. These courts included Jewish cabalists, astrologers and even the physician Jean de Saint-Remy, grandfather of Nostradamus. In fact, Christopher Columbus was a member of the Court for a while, and Rene was the person who gave him his first ship’s commission to Tunis. They would hold constant soirees, poetry readings, mystery plays, and “allegorical” knightly tournaments called pas d’armes, a combination of battle and pre-scripted play.

Rene established rules and traditions for knighthood, chivalry and jousting which are still observed by chivalrous orders and anachronistic societies today. He wrote a couple of books on the subject, one being Livre des Tournies, or Manual for the Perfect Organization of Tournies, which includes things like how to make a challenge, how to properly display banners, and how to show ladies proper respect. The other was called Battles and the Order of Knighthood and the Government of Princes. Today this rests in the library of Lord William Sinclair and bears the names “Jesus — Mary — John” on the cover — the names, we now know, of his biblical ancestors. Rene’s courts manifested a fairy tale-like legend around them, as they perpetuated the stories of the Holy Grail, King Arthur, Tristan and Isolde, etc. Rene in particular was preoccupied with the Grail story, seeing it as an allegory for his own family’s descent from Christ. He is known to have collected “Grail cups,” and his favorite possession was a red crystal goblet of Egyptian origin which he believed had been used by Jesus and Mary Magdalen during their wedding at Cana. An inscription on the side of the cup read: “He who drinks well will see God. He who quaffs at a single drop will see God and the Magdalen.”

Rene’s influence on the European culture of the Renaissance was so great that we might wish to call it the “Rene-sance.” He befriended Cosimo de Medici while in Italy, and many believe him to have been the impetus for a number of important decisions made by de Medici during this time. These include: the founding of Europe’s first public library in San Marco in 1444, which was loaded with rare manuscripts on neo-Platonic, Pythagorean, Gnostic and Hermetic thought; the instruction of the University of Florence to begin teaching Greek; and the creation of an academy for the study of Pythagoras and Plato, which sparked a number of other, similar institutions. Rene is also credited with introducing into this intellectual Renaissance the theme of “Arcadia,” the Greek Paradise.

In his court at Tarascon, Rene staged “The Pas d’Armes of the Shepherdess.” The Shepherdess in the play was his mistress at the time, who, according to Baigent, et. al in Holy Blood, Holy Grail, was, “an explicitly Arcadian figure, embodying both romantic and philosophical attributes,” and she presided over a tournament fought by knights who represented conflicting ideals which must be reconciled, a very Hermetic concept. Rene also depicted other Arcadian themes in his famous paintings, often showing himself standing next to a tombstone that looks eerily like the headstone at the grave of Marie de Blanchefort at Rennes le Chateau, including the inscription it bears.

Dagobert’s RevengeLe Fountaine d’Anjou, and also in two of the illustrations from his illuminated manuscript, Les Coeur d’Amours Espris (The Book of the Heart Possessed by Love.) In these paintings, the tomb and the shepherds are associated with an “underground stream,” Alpheus (from the Greek for â€˜source’), which according to the manuscript was, “brought forth by the sorcerer Virgil,” whom Baigent, et. al. says “would have been associated with Arcadia by Rene’s contemporaries.” Alpheus is a real river in Arcadia, in Greece, and it really does go underground, re-emerging at the Fountain of Arethusa in Spain. This river represented an “underground stream” of secret knowledge passed down through the “subterranean” Grail families and the organizational offshoots of the Prieure de Sion. This is like the “clear and troubled fountaine” referred to in Charles Peguy’s poem “The Cross of Lorraine,” and these themes of the shepherds, the tomb and the underground Arcadian stream would later be picked up by Grail initiate Nicholas Poussin for his painting The Shepherds of Arcadia, another item central to the Rennes le Chateau mystery.

Rene married his second wife, Jeanne of Laval, in 1454, with whom he stayed until he died at Aix-la-Chappelle on July 10, 1480, leaving behind a huge and carefully organized library. The tombstone that he had chosen for his burial at the Church of Saint Maurice was rather odd, as it was surmounted by a painting he had made showing a dying, half-skeletal king sitting on a throne, holding a scepter and orb, his crown slipping off of his head as it leans to the side. It is fitting that a man with so much worldly power, and yet so spiritually adept was so comfortable with his own inevitable mortality. For Rene d’Anjou, as for another famous mystic of great renown, Death was “the crown of all” — even in Arcadia… readers will recognize this woman’s gravestone as being quite central to the Rennes le Chateau/Holy Grail/ Prieure de Sion mystery. This tomb can be seen in his painting 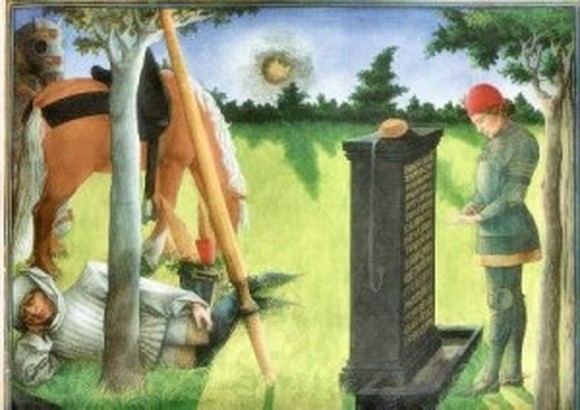