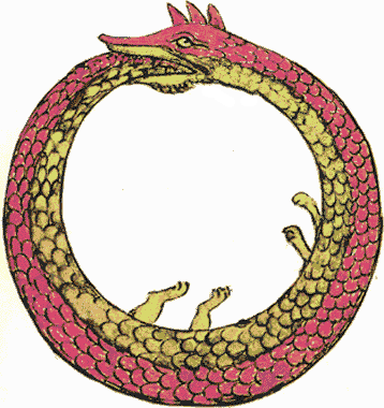 Eternal return (also known as "eternal recurrence") is a concept which posits that the universe has been recurring, and will continue to recur, in a self-similar form an infinite number of times across infinite time and/or infinite space. The concept initially inherent in Indian philosophy was later found in ancient Egypt, and was subsequently taken up by the Pythagoreans and Stoics. With the decline of antiquity and the spread of Christianity, the concept fell into disuse in the western world, though Friedrich Nietzsche resurrected it as a thought experiment to argue for amor fati.

In addition, the philosophical concept of eternal recurrence was addressed by Arthur Schopenhauer. It is a purely physical concept, involving no supernatural reincarnation, but the return of beings in the same bodies. Time is viewed as being not linear but cyclical.

The basic premise proceeds from the assumption that the probability of a world coming into existence exactly like our own is finite. If either time or space are infinite then mathematics tells us that our existence will recur an infinite number of times.

In 1871, Louis Auguste Blanqui, assuming a Newtonian cosmology where time and space are infinite proceeded to show that the eternal recurrence was a mathematical certainty.[1] In the post-Einstein period, there are doubts that time or space is in fact infinite, but many models exist which provide the notion of spatial or temporal infinity required by the eternal return hypothesis.

The oscillatory universe model in physics could be provided as an example of how the universe cycles through the same events infinitely. Stephen Hawking's concept "arrow of time", for example, discuss cosmology as proceeding up to a certain point, after which it undergoes a time reversal (which, as a consequence of T-symmetry, is thought to bring about a chaotic state due to entropy). Hawking and J. Richard Gott have also proposed models by which a/the universe could undergo time travel, provided the balance between mass and energy created the appropriate cosmological geometry.

Multiverse hypotheses in physics describe models where space and or time is infinite, although local universes with their own big bangs could be finite space-time bubbles.

The concept of cyclical patterns is very prominent in Indian religions, predominantly in Jainism and inclusive of Hinduism and Buddhism among others. The wheel of life represents an endless cycle of birth, life, and death from which one seeks liberation. In Tantric Buddhism, a wheel of time concept known as the Kalachakra expresses the idea of an endless cycle of existence and knowledge.[2]

However it is to be noted that the cycle of life in Buddhism does not involve a soul passing from one body to another, but the karma of the deceased being carrying on to another being born. To get rid of this cycle the person should get rid of its karma through the attainment of enlightenment. In ancient Egypt, the scarab (or dung beetle) was viewed as a sign of eternal renewal and reemergence of life, a reminder of the life to come. (See also "Atum" and "Ma'at.")

The ancient Mayans and Aztecs also took a cyclical view of time.

In ancient Greece, the concept of eternal return was connected with Empedocles, Zeno of Citium, and Stoicism.

Judaism posits a creation "In the beginning" and a messianic "end of days," which mean Judaism has a linear, not a cyclical, view of time. But cyclical time and return are reflected in Jewish traditions such as: The history of the Jewish people is said to be repeating events in the lives of its biblical forefathers; people’s lives in the next world, or after death, are to some extent spiritual repetitions of what they did in this world; and some kabbalists wrote that time is composed of seven cycles, which repeat every seven thousand years (a view rejected by Isaac Luria). These concepts give events and human choices some of the eternal return’s infinite weight.[3]

The symbol of the Ouroboros, the snake or dragon devouring its own tail, is the alchemical symbol par excellence of eternal recurrence, possibly borrowed from the Norse concept of Jörmungandr or the Midgard Serpent. The alchemist-physicians of the Renaissance and Reformation were aware of the idea of eternal recurrence; the physician-philosopher Sir Thomas Browne in his A Letter to a Friend circa 1657 linked the Uroboros symbol with the idea of eternal return thus -

that the first day should make the last, that the Tail of the Snake should return into its Mouth precisely at that time, and they should wind up upon the day of their Nativity, is indeed a remarkable Coincidence, which tho Astrology hath taken witty pains to salve, yet hath it been very wary in making Predictions of it.

The concept of "eternal recurrence" is central to the writings of Friedrich Nietzsche. As Heidegger points out in his lectures on Nietzsche, Nietzsche's first mention of eternal recurrence, in aphorism 341 of The Gay Science (cited below), presents this concept as a hypothetical question rather than postulating it as a fact. According to Heidegger, it is the burden imposed by the question of eternal recurrence—whether or not such a thing could possibly be true—that is so significant in modern thought: "The way Nietzsche here patterns the first communication of the thought of the 'greatest burden' [of eternal recurrence] makes it clear that this 'thought of thoughts' is at the same time 'the most burdensome thought.' "[4] The thought of eternal recurrence appears in a few of his works, in particular §285 and §341 of The Gay Science and then in Thus Spoke Zarathustra. It is also noted in a posthumous fragment.[5] The origin of this thought is dated by Nietzsche himself, via posthumous fragments, to August 1881, at Sils-Maria. In Ecce Homo (1888), he wrote that he thought of the eternal return as the "fundamental conception" of Thus Spoke Zarathustra.[6]

Several authors have pointed out other occurrences of this hypothesis in contemporary thought. Rudolf Steiner, who revised the first catalogue of Nietzsche's personal library in January 1896, pointed out that Nietzsche would have read something similar in Eugen Dühring's Courses on philosophy (1875), which Nietzsche readily criticized. Lou Andreas-Salomé pointed out that Nietzsche referred to ancient cyclical conceptions of time, in particular by the Pythagoreans, in the Untimely Meditations. Henri Lichtenberger and Charles Andler have pinpointed three works contemporary to Nietzsche which carried on the same hypothesis: J.G. Vogt, Die Kraft. Eine real-monistische Weltanschauung (1878), Auguste Blanqui, L'éternité par les astres (1872) and Gustave Le Bon, L'homme et les sociétés (1881). Walter Benjamin juxtaposes Blanqui and Nietzsche's discussion of eternal recurrence in his unfinished, monumental work The Arcades Project.[7] However, Gustave Le Bon is not quoted anywhere in Nietzsche's manuscripts; and Auguste Blanqui was named only in 1883. Vogt's work, on the other hand, was read by Nietzsche during this summer of 1881 in Sils-Maria.[8] Blanqui is mentioned by Albert Lange in his Geschichte des Materialismus (History of Materialism), a book closely read by Nietzsche.[9] The eternal recurrence is also mentioned in passing by the Devil in Part Four, Book XI, Chapter 9 of Dostoevsky's The Brothers Karamazov, which is another possible source that Nietzsche may have been drawing upon.

Walter Kaufmann suggests that Nietzsche may have encountered this idea in the works of Heinrich Heine, who once wrote:

[T]ime is infinite, but the things in time, the concrete bodies, are finite. They may indeed disperse into the smallest particles; but these particles, the atoms, have their determinate numbers, and the numbers of the configurations which, all of themselves, are formed out of them is also determinate. Now, however long a time may pass, according to the eternal laws governing the combinations of this eternal play of repetition, all configurations which have previously existed on this earth must yet meet, attract, repulse, kiss, and corrupt each other again...[10]

Nietzsche calls the idea "horrifying and paralyzing", and says that its burden is the "heaviest weight" ("das schwerste Gewicht")[11] imaginable. The wish for the eternal return of all events would mark the ultimate affirmation of life:

What, if some day or night a demon were to steal after you into your loneliest loneliness and say to you: 'This life as you now live it and have lived it, you will have to live once more and innumerable times more' ... Would you not throw yourself down and gnash your teeth and curse the demon who spoke thus? Or have you once experienced a tremendous moment when you would have answered him: 'You are a god and never have I heard anything more divine.' [The Gay Science, §341]

To comprehend eternal recurrence in his thought, and to not merely come to peace with it but to embrace it, requires amor fati, "love of fate":[12]

My formula for human greatness is amor fati: that one wants to have nothing different, not forward, not backward, not in all eternity. Not merely to bear the necessary, still less to conceal it--all idealism is mendaciousness before the necessary--but to love it.[12]

A late 1880s comment by Nietzsche, "In an infinite period of time, every possible combination would at some time be attained," has been cited to argue that Nietzsche dropped his plans to try to scientifically prove the theory because he realized that if he would have to eventually repeat life as it is, his presumption of infinite time means "he" would also have to "repeat" life differently, since every configuration of atoms and events will occur.[13] Instead, according to this interpretation of Nietzsche, he continued to propound the doctrine for its psychological and philosophical import.

Related to the concept of eternal return is the Poincaré recurrence theorem in mathematics. It states that a system whose dynamics are volume-preserving and which is confined to a finite spatial volume will, after a sufficiently long time, return to an arbitrarily small neighborhood of its initial state. "A sufficiently long time" could be much longer than the predicted lifetime of the universe (see 1 E19 s and more).

Controversial theoretical physicist Peter Lynds suggested a model of eternal recurrence in a 2006 paper.[14] Lynds hypothesizes that if the universe undergoes a big crunch, the arrow of time may reverse. Others have approached the question of eternal recurrence from a physics perspective in different ways, including a hypothesis based on the transactional interpretation of quantum mechanics.[15] Other cosmologists such as Massachusetts Institute of Technology professor Max Tegmark consider the possibility that the known universe is just one of many in a multiverse, presenting the argument that existences identical to our own recur infinitely over infinite space.[16] Currently all recurring cosmological models are very controversial within the scientific community, especially due to the fact that there is no evidence to support them. Furthermore, several models proposed in the past have been refuted such as the bouncing model.[17]